Driver and Company to Race for Pavement Championship 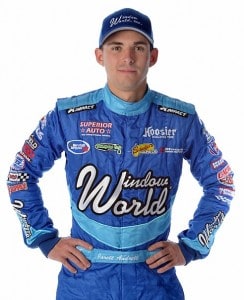 INDIANAPOLIS, IN (May 1, 2013) — Continuing to fill out a busy summer schedule, Andretti Autosport Short Track announced today that third generation driver Jarett Andretti will compete in every pavement United States Auto Club (USAC) Traxxas Silver Crown Series event. The Silver Crown Series is one of the most prestigious in all of open wheel racing and lists Jarett’s father John and great uncle Mario Andretti as graduates.

Window World, Inc.®, a long time supporter of both Jarett, and his father, will be the primary sponsor of the No. 4 Window World machine. The car will also carry associate sponsorship from Superior Auto and Stoops Freightliner during the series’ five-race pavement schedule. For Andretti, who is already committed to a full dirt sprint car schedule throughout Indiana, the Silver Crown races will add additional experience to his promising racing career.

“I’m extremely grateful for Window World coming on board and giving myself and Andretti Autosport Short Track the opportunity to race the Silver Crown pavement races this year,” said Andretti. “The series has so much history and my family has deep roots racing Silver Crown machines as well. Our goal is to gain experience in longer races and also have strong finishes for Window World and all of our supporters.”

The deep tradition of the Andretti family in the Silver Crown Series attracted Window World to continue to support Jarett as he climbs up the motorsports ranks.

“Our relationship with John goes back to the Daytona 500 and Indy 500, and more recently the Rolex 24 with Jarett and John,” said Tammy Whitworth, CEO of Window World. “Both Window World and Andretti Autosport are family companies, built upon passion, talent and hard work. Jarett has a promising future and Window World is proud to be a part of it.”

The Silver Crown car and Andretti’s sprint car add experience on Jarett’s resume that already includes championships in go-karts and the USAC Eastern Ignite Pavement Series. Last season he competed in supermodifieds capturing the Oswego (N.Y.) Speedway Rookie of the Year honors in that class.

Andretti is currently a sophomore year at North Carolina State University in the honors program.

Window World, Inc.®, headquartered in North Wilkesboro, N.C., is a replacement window company with stores and offices in more than 200 cities nationwide. Founded in 1995 and led by CEO Tammy Whitworth, the company supplies windows, siding and doors to consumers through its network of stores. Window World is an ENERGY STAR® retail partner. Its products have earned the Good Housekeeping Seal of Approval five years in a row. Additionally, through its charitable foundation Window World Cares®, the Window World family provides funding for St. Jude Children’s Research Hospital® and was named New Corporate partner of the Year in 2010. Window World, Inc. also supports the Veterans Airlift Command, a non-profit organization that facilitates free air transportation to wounded warriors, veterans and their families. For more information about Window World, visit www.WindowWorld.com or call 1-800 NEXT WINDOW.

About Window World of Connecticut

Listen to What Our Customers Are Saying